A Beautiful Introduction to AI Art: How Machines Are Changing the Way We Create 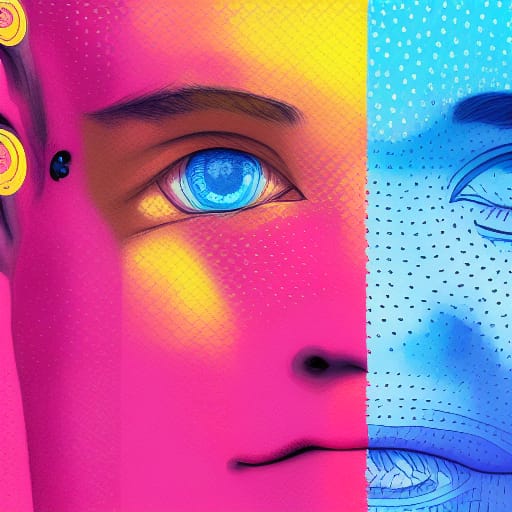 Artificial intelligence (AI) is starting to impact the art world as it becomes more sophisticated. AI is used to create paintings, sculptures, and other works of art that are stunning in realism and complexity. This post will explore the fascinating world of AI art and see how machines change how we create!

AI Art’s Introduction To The World

The Artificial Intelligence art trend started in late 2016 when a group of Google researchers open-sourced their project called “DeepDream”. This machine learning algorithm produced dream-like images from input images by training on a large dataset of images. The results were interesting, and people worldwide started to experiment with the algorithm to produce even more fascinating AI-generated artworks.

Since then, many AI artists have emerged and are using GANs to create stunning works of AI art. Some notable AI artists include Mario Klingemann, Robbie Barrat, Memo Akten, Kyle McDonald, and Christopher Olah.

Machine learning algorithms use a technology called General Adversarial Networks, or by the acronym GANs for short.

This seemingly simple process is more complicated than one might think since it is highly dependent on the size and, most importantly, the quality of the dataset and then the resulting time which has to be given to teaching the algorithm what is art.

Obviously there is a a huge reliance on computing power, parrellel networks, and graphics cards. The more computational power, the larger the training data set and the less time it takes for every model to train.

Training The Model To Know What Is Digital Art

In this context, “training the model”, in simple terms, means that the algorithm continuously generates images through the generator component, and the other model component, called the discriminator, “decides” whether the generator’s output is close to the original dataset or not.

So machine learning is the endless days of training to decide which is an art and which is not. From here, the model being built can now, based on what it learned during the training process, create something completely new that has never been drawn before, and this is AI Art!

We now live in a time when machine learning can engage in art creation and produce some real quality of digital output.

Machine Learning To Be Artists

The first question always asked is whenever dealing with technology – will is replace the human in the process?

The answer is probably no, at least anytime soon. AI algorithms, with appropriate training, can generate original images on their own. But like the famous quote from Douglas Adams “with infinite monkeys and infinite typewriters could write the complete works of Shakespear” a lot of the output either nonsense or horrible art. Human are needed as a team of people know what good art looks like and can select and classify only the best images with their styles. This image classification is the core of training the AI algorithms to increase the resolution of every selected image to allow for the better quality art output.

One interesting trait of AI paintings is that in some of them, you see brush strokes and certain 3D elements that the AI overlaid on certain parts of the painting. Coupled with vector correction and resolution adjustment AI technologies, this allows for the creation of AI paintings with an oil-painting effect.

One of the most early but still impressive examples of AI artwork is a painting created by the AI artist ” Robbie Barrat “. The painting, called ” Portrait of Edmond de Belamy “, is a realistic portrait of a man generated by an AI algorithm.

However, this portrait was not produced by human artists and went under the hammer in the Prints & Multiples sale at Christie’s on 25 October 2018.

AI art is not just limited to paintings. AI algorithmic art has also generated sculptures, music, and even poetry. For example, the AI sculptor “Ai Weiwei” has created a series of portraits generated by an AI algorithm. These portraits are made from marble and are incredibly lifelike!

As you can see, AI is changing the way we create art. It provides us with new ways to create realistic and complex works of art. We are just beginning to scratch the surface of what AI can do for art, and we can’t wait to see what the future holds!

In October 2019, Google released an AI art tool called ” AI Portraits “. This tool allows anyone to upload a photo of themselves and have it automatically turned into a portrait painting.

The AI Portraits tool is powered by a machine learning algorithm that has been trained on a dataset of portraits from the 14th to 20th centuries. The algorithm analyzes the input image and then tries to recreate it in the style of one of these historical portraits.

The AI Portraits tool is just one example of how AI is changing the way we create art. With this tool, anyone can create a realistic portrait painting, without any prior knowledge or experience in art. This shows that AI can be used to democratize art, and make it accessible to everyone.

The Explosion Of AI Art Tools

AI Art is a current exploding trend in the world of art. The concept is based on the idea that machine learning algorithms can produce new never seen before images as output when appropriately trained using large computational resources on a vast amount of image data.

With this recognition has been the launch of the following many and growing range of AI Art tools over the recent year or so bring wider access to creative adversarial network art :

This website uses cookies to improve your experience while you navigate through the website. Out of these cookies, the cookies that are categorized as necessary are stored on your browser as they are essential for the working of basic functionalities of the website. We also use third-party cookies that help us analyze and understand how you use this website. These cookies will be stored in your browser only with your consent. You also have the option to opt-out of these cookies. But opting out of some of these cookies may have an effect on your browsing experience.
Necessary Always Enabled
Necessary cookies are absolutely essential for the website to function properly. This category only includes cookies that ensures basic functionalities and security features of the website. These cookies do not store any personal information.
Functional
Functional cookies help to perform certain functionalities like sharing the content of the website on social media platforms, collect feedbacks, and other third-party features.
Performance
Performance cookies are used to understand and analyze the key performance indexes of the website which helps in delivering a better user experience for the visitors.
Analytics
Analytical cookies are used to understand how visitors interact with the website. These cookies help provide information on metrics the number of visitors, bounce rate, traffic source, etc.
Advertisement
Advertisement cookies are used to provide visitors with relevant ads and marketing campaigns. These cookies track visitors across websites and collect information to provide customized ads.
Others
Other uncategorized cookies are those that are being analyzed and have not been classified into a category as yet.
SAVE & ACCEPT